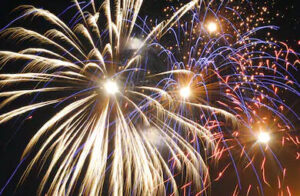 It’s always been my policy to shy away from political discussions here, and I’m sure that many readers would conclude from the title of this post that I’d comment on the weekend strike against the Iranian general by our military. No, I’m not weighing in on the pros and cons in this forum, which would only create hyper partisan debate which usually devolves into unproductive rants and raves. Since only a handful of people are privy to the facts relating to the action, I choose to wait until the whole story is revealed.

The topic of this post zeroes in on the inevitable behavior of a few knuckleheads who feel the need to celebrate the clock striking midnight on New Years Eve with a barrage of powerful firework materials, rocking structures nearby. In my small town in Iowa, this year was rung in by a higher number of inconsiderate buffoons that in years past, setting off the deafening explosions most of the day and night, and well beyond the bewitching midnight hour.

I’m sure our community was not alone. It seems with every passing year we have witnessed an ever growing number of neighbors believing it’s their duty to bombard everyone around them with ear drum shattering record decibel levels, frightening pets and humans in order to what? Greet a new year?

Those of us who find that attitude unacceptable will again take our concerns to our local mayor and city council to protest their inaction for these and similar disturbing the peace demonstrations during every calendar year. In our case the brainiacs at city hall chose to establish a window in the evening that the howitzers would have free reign to blast their way into another year, ignoring the pleas by a huge number of disgruntled voters who made their wishes known ever since the latest 4th of July disaster.  The more they cater to the “celebrants”, the more they stretch the boundaries and hours to ignite the fuses. And the consequences for the violators? Yeah, you guessed it. Consequences is a word that has no meaning here. Our citizens have made their feelings well known by changing the names of council members, only to have the new faces revert to the old ways once seated at the round table.

Just another reason why the timetable for getting our affairs taken care of, new revenue streams developed, home sold, and debt retired, so we can hit the road and explore the vast amount of territory away from the built up madness known as “civilization”.