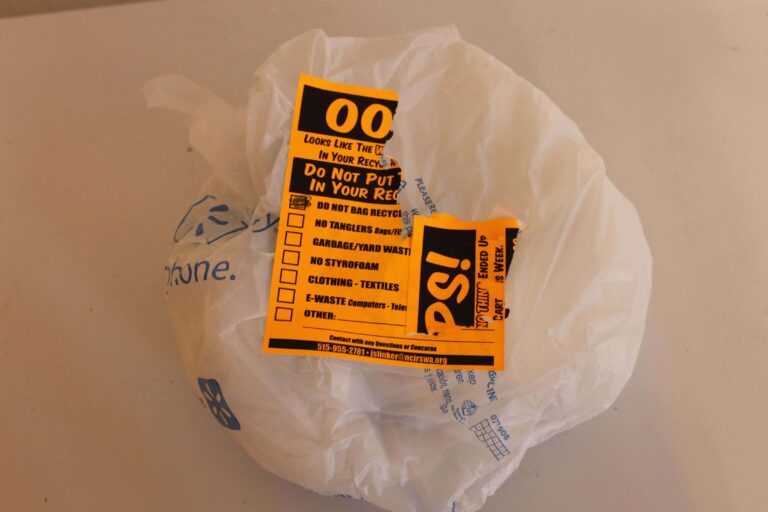 So, let me get this straight. My community has a recycling center, and encourages all citizens to separate their garbage into two garbage cans, one for regular garbage to be transported to the city landfill by the city’s garbage truck personnel, with the other can dedicated to recyclable items, that would be taken to the recycle center by city sanitation personnel. And yet, in spite of following the same procedures since 2011, this afternoon (recycle day), my can was “stickered” with a warning that my recycled can included items that the recycling center cannot accept, including plastic bags that are clearly printed with language that labels them as being  “recyclable”.

As a fair minded individual, my wife took the time to call our city hall, where the sanitation administrative office is located, in order to learn why this happened today.  The explanation was reasonable in the beginning. Apparently, the plastic garbage bags that many citizens used to separate out the items and then dumped into the can, had those red straps needed to tie securing the bag which prevents the bagged items to blow around when the lid was opened to either add bags, or to empty them on “recycle day”, thus littering the area, those strips would get caught in the machinery at the recycling center, causing delays in processing the material. Not knowing the machinery being utilized, it’s tough to refute that aspect, although I’d find it difficult to image a massive machine would have trouble plowing through a one inch wide plastic strip, while being able to handle metal cans.

Accepting that premise, the question was asked, what would we need to do with the “recyclable” plastic bags that we used to separate the two categories. We were told to return the “recyclable” bags that the recycling center couldn’t accept, to the stores that provided the “recyclable” plastic bags, so the store could recycle them.  Taking that one step further, we called the store we purchase our groceries from, and asked them who they send those same “recyclable” bags to when we return them to be recycled. The answer was, they have a company who comes by to collect those bags and has them “recycled”. (I’m guessing that they dump them off at a recycling center, but we had already wasted precious time today chasing down people who should have the answer to a simple question.)

Being one part reasonable, and one part skeptic when it comes to government agencies, I’ve concluded that the unintended consequences that result from good intentions, have created the fleecing of American taxpayers, when trying to solve a problem that creates multi-tired solutions, costing multiple fees for funding the various methods to handle the process, because the well intentioned decision, wasn’t well thought out in the first place. In other words, it’s so easy for an elected, or unelected bureaucrat to create a solution for a perceived problem, and not really evaluate the ramifications for that decision. It’s prevalent through all layers of government, and we only have ourselves to blame for the continued waste of time and money, since we collectively have allowed those same “decision makers” to escape any accountability.

My thinking isn’t anything new, but I thought it was time to “recycle” that view.

‘Twas The Night Before Christmas

What Are You Waiting For ?